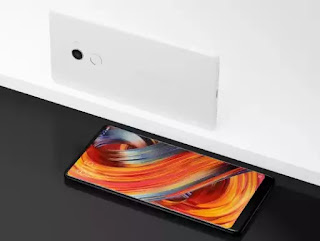 Earlier today, Xiaomi unveiled the Mi MIX 2, in China. It’s the successor to last year’s Mi MIX, which was the company’s first bezel-less smartphone with futuristic design choices. Now, the company has confirmed that it will launch of the futuristic, bezel-less smartphone in India soon. The official Twitter handle of Mi India has teased the image of the Mi Mix 2, and mentioned that the device is coming soon to India. However, there’s no launch date as of now.
#MiMix2 – Coming soon to India! Are you ready for it? pic.twitter.com/1SowVaOWJh
– Mi India (@XiaomiIndia) September 11, 2017
The Xiaomi Mi MIX 2’s body is made using aluminium alloy and ceramic.
It offers a massive 5.99-inch 1080 x 2160 Full HD IPS LCD bezel-less display with an 18:9 aspect ratio and 1500:1 contrast ratio. The company has replaced the cantilever piezoelectric acoustic system with a regular earpiece, though.
The octa-core Snapdragon 835 chipset runs the show in the Mi MIX 2, and it is paired with 6GB or 8GB of RAM and 64GB/128GB/256GB of internal storage, depending on the variant. Furthermore, there is a 12-megapixel rear-facing camera with OIS and 4K video recording. The front-facing camera has a resolution of an average 5 megapixels. The phone supports 4G LTE networks and comes packed with a 3,400mAh battery, which is 1,000mAh lesser than last year’s Mi MIX.
Although the pricing for the Mi MIX 2 was announced for just the Chinese market as of now, we can still guess its Indian pricing. The 6GB RAM 64GB storage option could be priced around Rs.35,000, while the 128GB and 256GB storage variants could cost around Rs. 37,500 and Rs.40,000, respectively. If the company plans to bring the 8GB RAM variant of the smartphone to India, it might retail somewhere close to the Rs. 50,000 mark.
For more details about the launch date in India, we recommend you to stay tuned with us.
Xiaomi Mi MIX 2: Specifications
Xiaomi Mi MIX 2 will soon be launched in India, company teases was last modified: September 11th, 2017 by Onkar Soundankar

HIGHLIGHTS Flipkart teases exclusive availability of Xiaomi’s “Desh ka Smartphone” New Xiaomi smartphone will be launched on November 30 Redmi 5A is likely to be the next Xiaomi model in India Following a couple of teasers, it has now been confirmed that Xiaomi will sell its “Desh ka Smartphone” exclusively on Flipkart. The new smartphone is scheduled to be launched in […]

The start of the rollout of the global MIUI 9 was announced by Xiaomi today. Devices that will get the UI early November will be the Redmi Note 4, Mi Mix 2, Mi Max 2 and the Redmi Y1 series, which just went official. The new MIUI 9 features were introduced back in July at […]

A maverick, defines Merriam-Webster, is an individual who does not go along with a group or party. Of the over 4,70,000 words in the American dictionary, that is the one Manu Jain, the India head of Xiaomi, world’s fifth largest smartphone maker, chooses to define himself. “I am a maverick. I challenge status quo,” says the […]