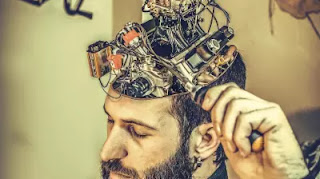 Berlin: Scientists have developed a new artificial intelligence (AI) system that can decode brain signals, an advance that may help severely paralysed patients communicate with their thoughts. Artificial intelligence has far outpaced human intelligence in certain tasks. Researchers from University Hospital Freiburg in Germany led by neuroscientist Tonio Ball showed how a self-learning algorithm decodes human brain signals that were measured by an electroencephalogram (EEG).
It included performed movements, but also hand and foot movements that were merely thought of, or an imaginary rotation of objects. The system could be used for early detection of epileptic seizures, communicating with severely paralysed patients or make automatic neurological diagnosis.
“Our software is based on brain-inspired models that have proven to be most helpful to decode various natural signals such as phonetic sounds,” said Robin Tibor Schirrmeister, University Hospital Freiburg. “The great thing about the program is we needn’t predetermine any characteristics. The information is processed layer for layer, that is in multiple steps with the help of a non-linear function,” said Schirrmeister.

“The system learns to recognise and differentiate between certain behavioural patterns from various movements as it goes along,” he said. The model is based on the connections between nerve cells in the human body in which electric signals from synapses are directed from cellular protuberances to the cell’s core and back again.
“Theories have been in circulation for decades, but it wasn’t until the emergence of today’s computer processing power that the model has become feasible,” comments Schirrmeister.
Up until now, it had been problematic to interpret the network’s circuitry after the learning process had been completed. All algorithmic processes take place in the background and are invisible.

That is why the researchers developed the software to create cards from which they could understand the decoding decisions. The researchers can insert new datasets into the system at any time. “Our vision for the future includes self-learning algorithms that can reliably and quickly recognise the user’s various intentions based on their brain signals. In addition, such algorithms could assist neurological diagnoses,” said Ball, head investigator of the study published in the journal Human Brain Mapping.

Reliance Communications (RCom) has come up with a new offer, although it’s not for prepaid or postpaid customers, but for dongle users. The company has listed a new offer on its e-commerce portal: rcom-eshop.com. RCom has announced a new combo offer of Reliance 4G Wi-Pod & Reliance 4G SIM Bundle Offer. RCom is offering 4G Hotspot […]

Babri dispute: Shia Waqf Board says mosque can come up at a distance

The Shia Waqf Board joined the Ram Mandir-Babri Masjid tussle, filing an affidavit at the Supreme Court where it suggested the mosque be located at a reasonable distance in a Muslim-dominated area. The dispute is centered on a plot of land in Ayodhya that Hindus say was the birthplace of their god Ram. The spot […]